Gluster Volumes are inherently highly-available when the volume replica count is 2 or more but when accessing Gluster Volumes via traditional file protocols like NFS and CIFS you need to have an IP address for your Gluster Volume that will be resilient in the event that a QuantaStor appliance is taken offline. Gluster VIFs automatically failover to another node which has a brick which is a member of the Gluster Volume in the event the node where the VIF is attached goes offline. Note also that when the VIF fails over to another node it will only attach to a parent ethernet port with the same name. For example, if the VIF is attached to eth0 on system A and the VIF fails over to system B it will attach to eth0 on system B. For that to work properly eth0 must be configured with a valid IP address on all nodes to which the VIF can failover to (all nodes with bricks that are part of the Gluster Volume). 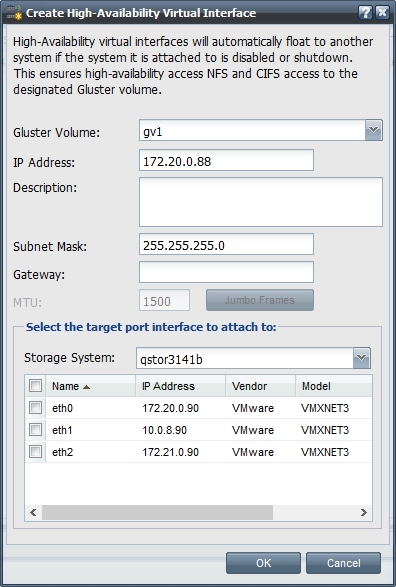